How Nick Clegg hit the pop charts. The story so far…

How the media covered the story…. 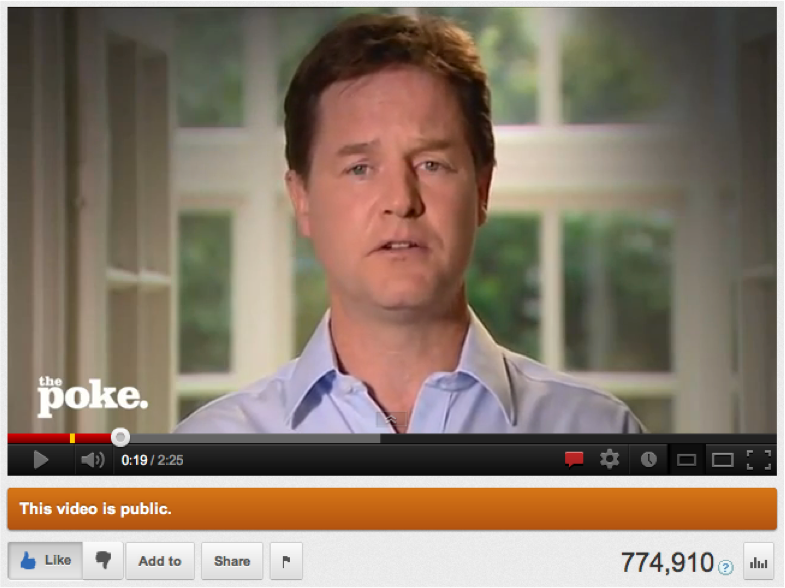 22:00 Thank you all for getting @nick_clegg saying sorry into The Top 40 and raising some much needed dosh for @SheffChildrens.

If everyone at the Lib Dem Conference buys it tomorrow they will have a Top 10 hit on their hands. So we’ll now leave it to the @LibDems to make that happen.

Deputy Prime Minister Nick Clegg is kicking off more than his party conference today– he’s going up against pop big guns David Guetta and Pink as he launches his pop career on iTunes with his debut single ‘Nick Clegg Says I’m Sorry [The Autotune Remix)’. 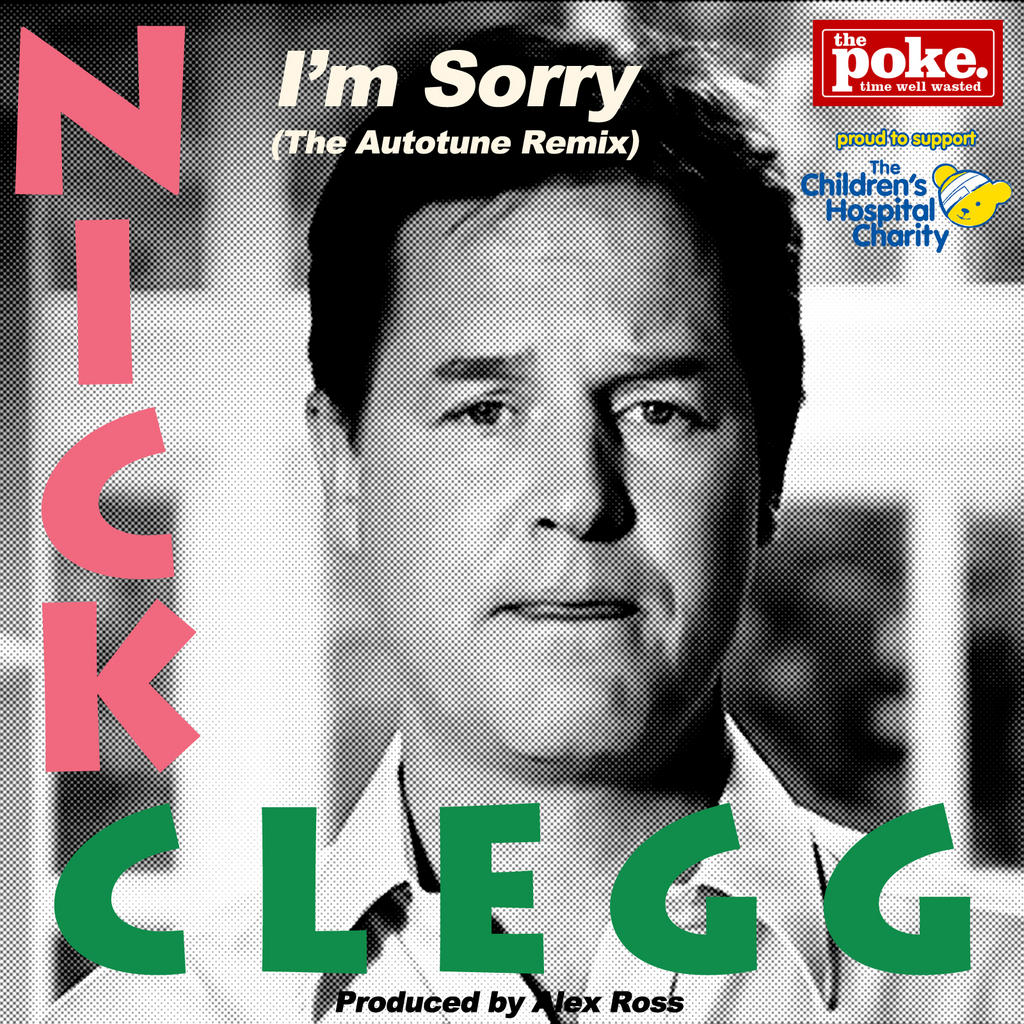 The single, produced by Alex Ross and The Poke, has gone live today on Apple’s iTunes store with other outlets including Amazon going live in the next 24hours.

We auto-tuned Nick Clegg’s apologetic tuition fees speech into a video that has had a achieved staggering 500,000 views in just 24 hours. Clegg gave consent for the video to be released as a charity single following a huge response on Twitter.

The viral video has already had a frightening amount TV exposure – having been featured on some major TV shows in the last 24 hours including Newsnight, BBC News, The One Show, ITV News, Channel 4 News, Five News, Sky News, News Round and Loose Women.

A Poke spokesperson said “ Can Nick Clegg be the first British political leader ever to become number 1 – while he’s still number 2?’

Here’s how it all happened…

On Wednesday night (19.9.12) we decided to remix Nick Clegg’s ‘Sorry’ speech and Alex Ross stayed up till 3am mixing it…

You might have seen Alex’s stuff on here before. His previous hits include > Leveson The Musical, The Poke autotunes The Apprentice and Downton Abbey Dubstep.

10:00ish Our website crashed under weight of traffic. While we were trying to fix it we wondered if the Lib Dems might give us permission to release it as a single?

We weren’t expecting to hear direct from old CLEGGO himself!

AFP – Parody remix of Clegg apology to go on iTunes

‘I work for Nippon Television, Japan’s most watched television channel. We are very interested in your remix of the Nick Clegg video’

‘I am writing to see if I can have permission to air parts of your Nick Clegg apology remix on CNN.’

“I would love to run it on Newsnight tonight‘

‘Hope you are well. I work on The One Show and this evening we would like to show the Nick Clegg apology remix that you have created.’ 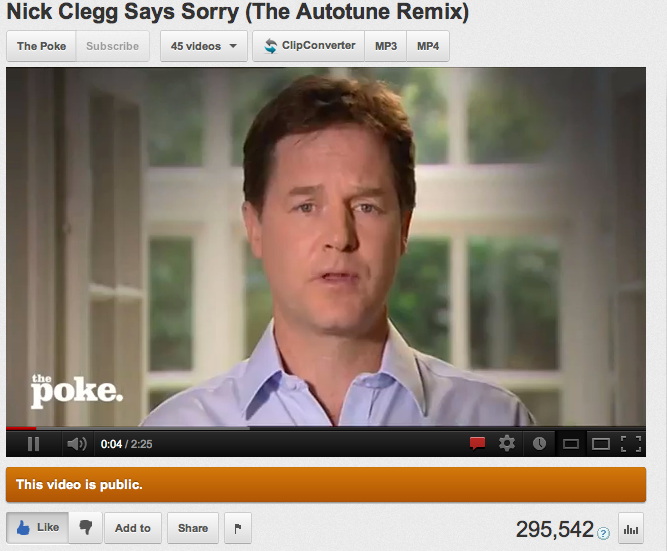 A trip to the newsagent… 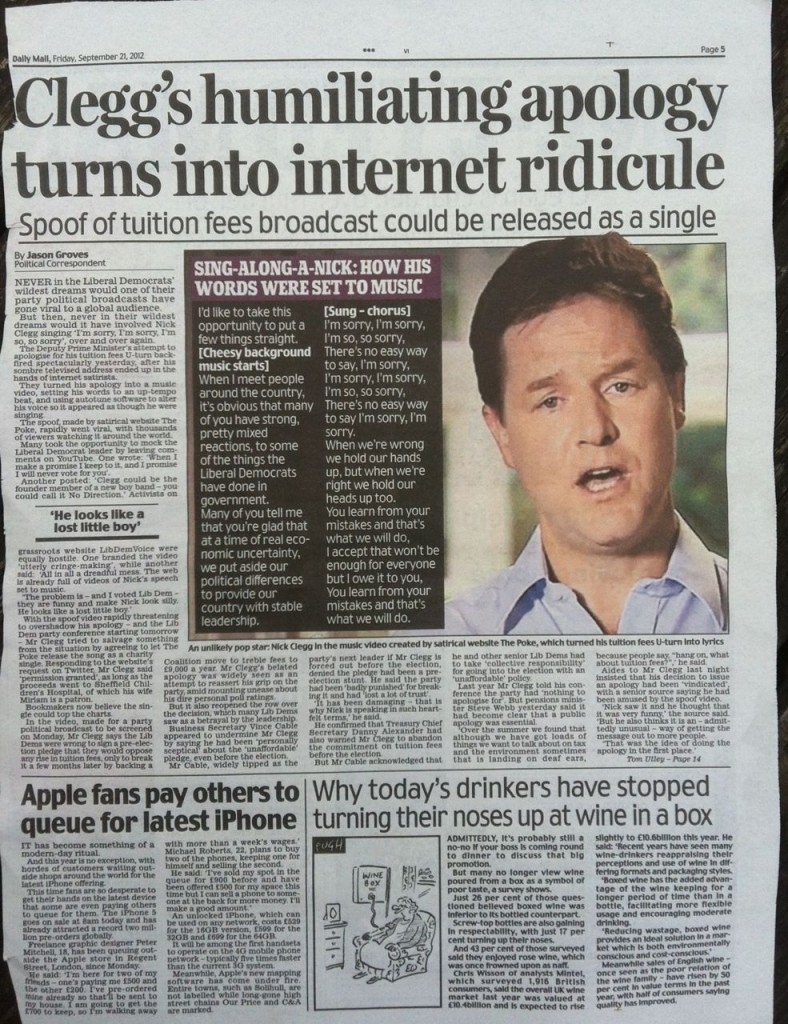 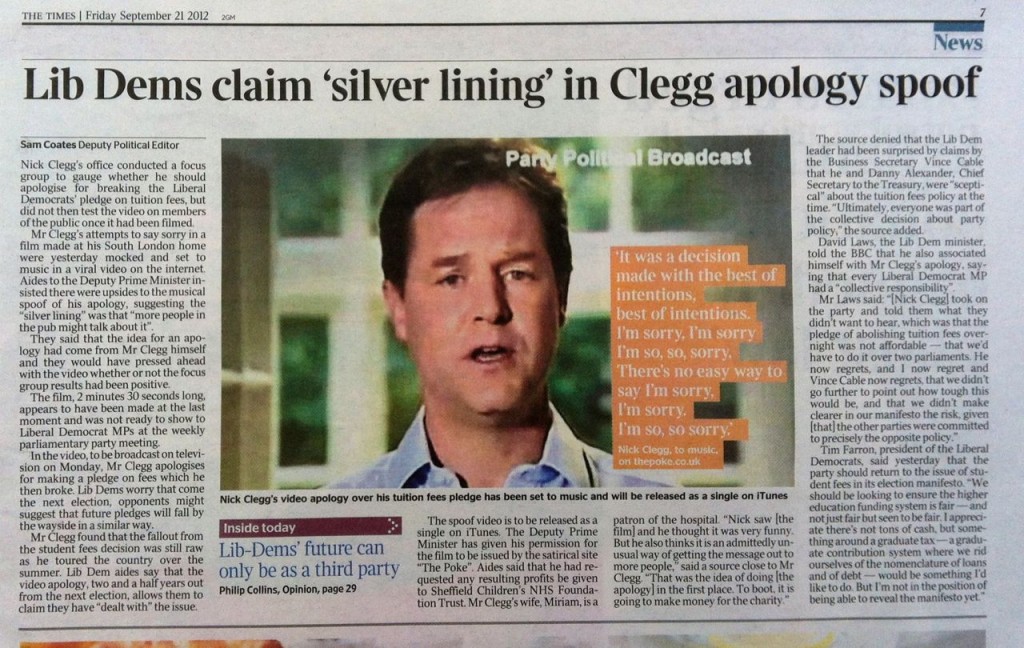 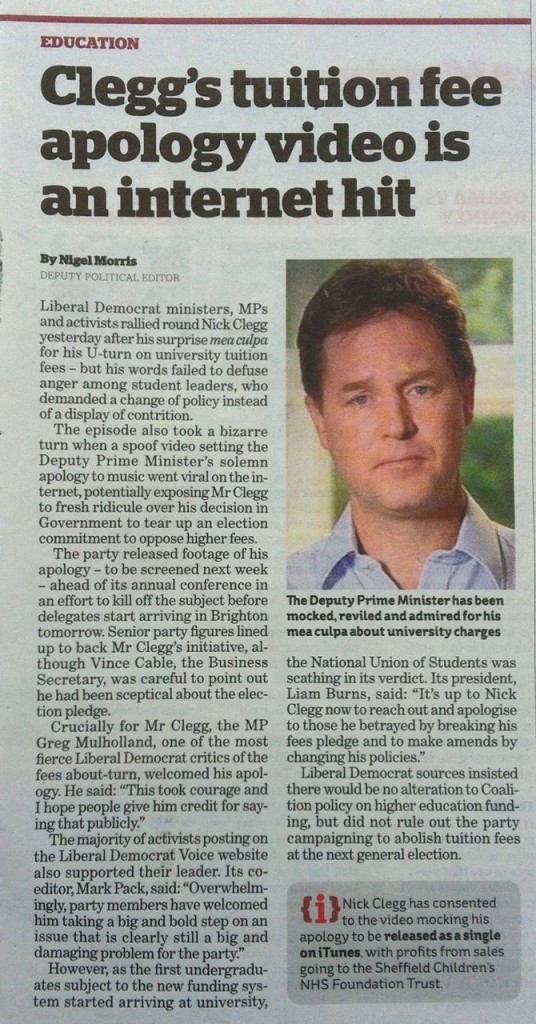 10.00am Looks like Tunecore could be the fastest way to release the single on as many platforms as possible…though iTunes approval ‘could’ take 10 days

1.39pm And your suggestions for the sleeve artwork are flooding in 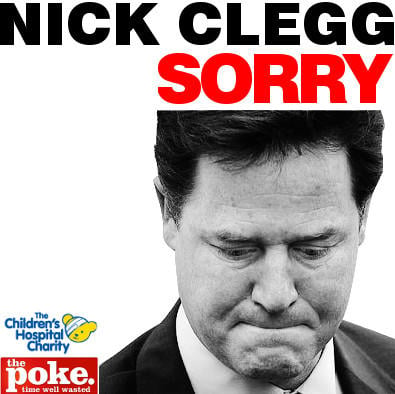 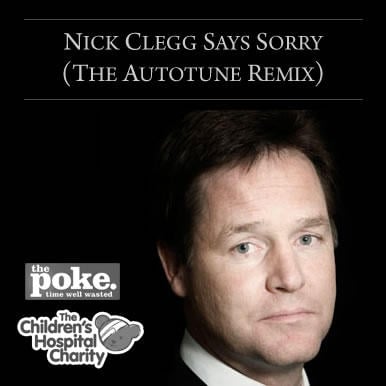 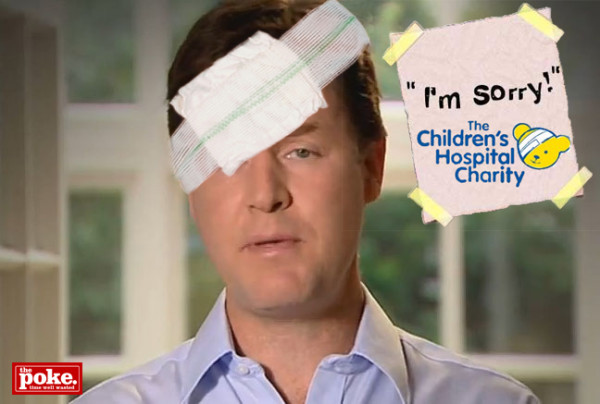 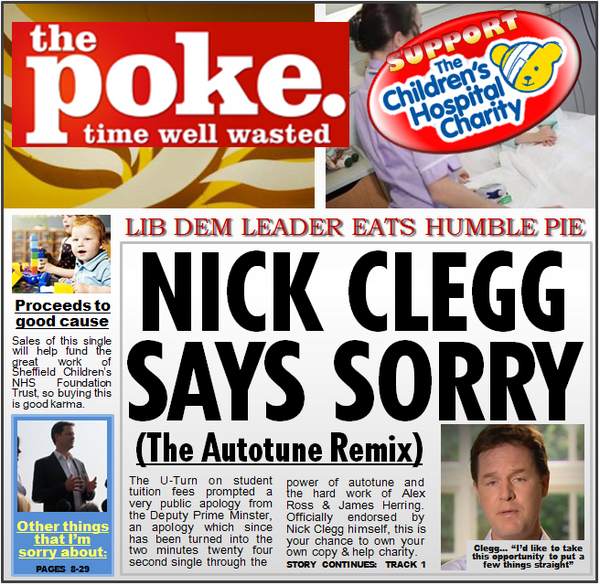 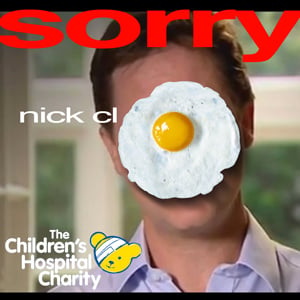 18:00 The brilliant people at Tunecore.com have sorted out our single release just waiting for approval from ITunes

………to be continued…story continues from the top of the page..